Inside the world’s largest STONE forest, where tropical rain has eroded rocks into 300ft razor-sharp spikes

Isolated and inhospitable, this huge collection of razor-sharp vertical rocks looks like the last place where wildlife would thrive.

The colossal ‘Grand Tsingy’ landscape in western Madagascar is the world’s largest stone forest, where high spiked towers of eroded limestone tower over the greenery.

But despite its cold, dangerous appearance, the labyrinth of 300ft stones is home to a number of animal species, including 11 types of lemur.

Its name, ‘Tsingy’ translates as ‘where one cannot walk’, due to the hazardous formations of razor-sharp pinnacles made from limestone which have been eroded by tropical rain. 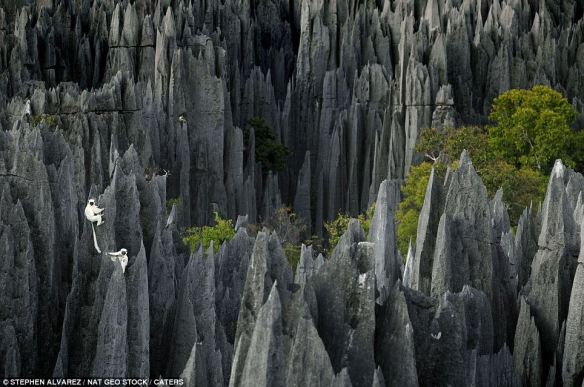 Explorer and photographer Stephen Alvarez captured the beauty of the Grand Tsingy when he went there as part of an expedition for National Geographic.
— – —

Life on the edge
more at dailymail